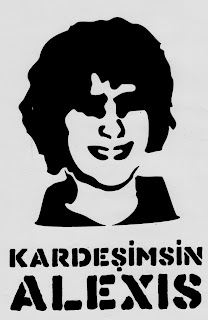 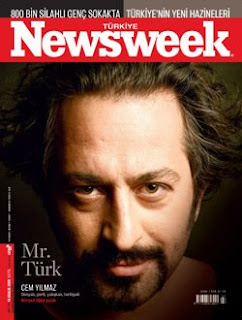 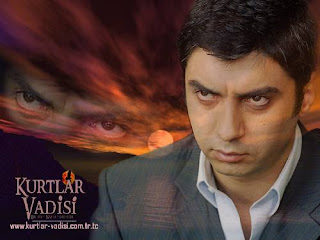 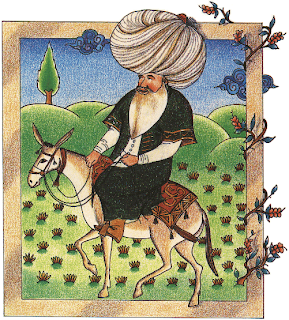 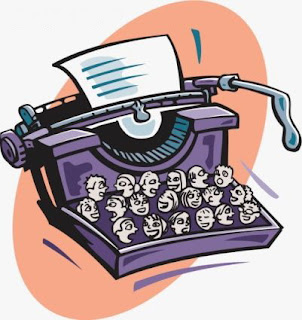 On Comics in Turkey 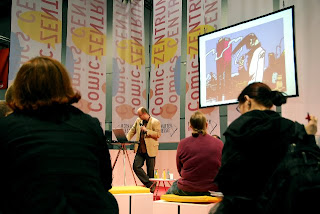 Comics and comic strips have been published in Turkey since one hundred odd years ago with some interruptions and since eighty years ago on a continuous basis. There have been some remarkable local productions which were published during this period. Yet, when comics are mentioned the first products that come to mind are those of foreign origin. Obviously, the foremost reason for this is that comics production in Turkey has never developed into an industry branch. Local comics that were financed and supported by newspaper publishers could not cope with foreign publications, neither on a quantitative nor on a qualitative basis. Therefore it is no surprise that even during the years 1955-1975, generally known as the golden age of comics in Turkey, no locally produced comics for children became popular. All of our most significant comics have been published in newspapers. In a time when magazines for children could survive even on small sales figures, comics artists turned to newspapers, thus reinforcing the presence of comics in newspapers. With growing income and influence, the artists were able to mould their work, which from then on could incorporate narrative forms according to the needs of the publication and the readers’ profile.

Historical themes, purple prose about heroic figures, and eroticism must have met readers’ expectations and publishing policy as they have firmly established themselves over many years. Almost every newspaper reserved a space for comics, especially historical ones. The periods in which newspapers very widely profited from comics cannot be ascribed entirely to the growing interest in this genre. Comics contributed to newspaper design on the visual level, too. Use of photograhs in the newspapers were limited until the second half of the sixties because of defficiencies of print technology, Thus, artists who worked both with the newspapers and in the comics genre were able to shape the visual aspect of the Turkish press. Caricatures, vignettes, portraits, illustrations and various decorations were used instead of photographs. Evidently, comics artists received good salaries and the comics they produced returned high royalties. With the introduction of modern printers to Turkey, photographs took over on the visual level. This transformation reduced the standing of comics within the newspaper irretrievably and reduced the royalties paid for their creation. Because of subsiding royalties, newspaper illustrators and graphic artists ceased to put energy into the production of comics. No matter how important their comics have been until then, comics lost their popularity in the aftermath of the radical changes of the 1970s and never reached it again.

The evolution of comics in the highly popular magazine Gırgır is once again due to favorable economic conditions and financial support from newspaper owners. In the second half of the sixties Haldun Simavi made a breakthrough in the media industry with veb-ofset facilities. In other words, until that date it was virtually impossible to produce hundreds of thousands of newspapers and distribute them over the whole country on a single day. With his new, fast-printing facilities, Haldun Simavi revolutionized the press and printing industry by producing massive amounts of newspapers and magazines rich in photographs and illustrations. At the onset of the 1970s he also experimented with an erotic, comical and to some extent political humour magazine: Gırgır. Along with its cultural and political identity, Gırgır’s commercial success cannot be disregarded. The emergence of many caricaturists or comics artists and their existence until this day is directly ascribable to Gırgır’s strong sales and economic success. Gırgır opened an alternative way for graphic artists who were hired by newspapers. Many young people were able to obtain very high amounts of money they could not have obtained in other jobs. Within this economic framework humorous comics and comics drawn in the cartoon style, which were compatible with girgir’s style, were bound to be popular.

All comics that have been published after the 1970s and have attained a place in the collective memory of the Turkish people are of humourous character. Nearly all of them are ironical, drawing heavily on exaggeratedly heroic characters and adventure-filled episodes by employing satirical language. Gırgır and other humour magazines that emerged at the same time reached total sales figures of one million copies. It goes without saying that this windfall of sales and the variety of magazines had a great impact on comics so that richness of visual style and narrative forms rose to a level never reached before. Galip Tekin, Suat Gönülay, Kemal Aratan and Ergün Gündüz were among the most productive comics artists of those years and the ones that strongly influenced the following generations of artists. However, this rise in quality and quantity was abruptly reversed by the heavy erosion of sales caused by the onslaught of television, so that by the first half of the 1990s sales of printed media fell by 80 percent as compared to the figures of ten years before. Confronted with the advance of private TV channels, magazines turned against mainstream taste and put an emphasis on stories that could not be aired on TV. This inevitable change marginalised the comics as much as they did the magazines and gave them a grotesk and carnavalesk characteristic.

The most important magazine of that period was L-Manyak. The main aim of the magazine is humour and all that relates to buffoonery. Openly obscene and scatological in character, it scorns the “sensitivities” of urban society. Typical targets of the magazine are predators, braggarts, the rich, gluttons, the brutal, ambitious businessmen, and persons who use their sexual attraction to climb up the social ladder. As opposed to its predecessors, however, one topic is not touched upon: politics. The cover page shows grotesque characters that expose ugliness, funny representations of violence and sexual practices. Yet on the whole it can be rightly asserted that funniness and humour is used in a critical sense. The use of violence against oppression, the wish to escape masses of people, mistrust towards political adherences, strong and insatiable sexual desire, hedonism, general mistrust towards people and indifference to money are the mainstays of the stories.

Nowadays comics in Turkey are styled on the narrative model of L-Manyak. At this point it is of some interest to dwell on common aesthetic preferences of the L-Manyak trend: as opposed to a very minimalistic approach as it was cultivated by Oğuz Aral, most editors now prefer drawings against a detail-loaded, photorealistic background and tiled page designs. Kötü Kedi Şerafettin (Şerafettin The Bad Cat) by Bülent Üstün showcases the punky past of the author and his aesthetic rebellion. In the L-Manyak “Martyrs” series “Memo Tembelçizer” he recounts stories about his artist friends who find death in many different ways. Oky’s subcultural story “Cihangir’de Bi Ev” (“A House in Cihangir”) revolves around one house in a quarter of Istanbul. Other typical examples of this period are Cengiz Üstün’s grotesque works that invert the logic of scary movies Kunteper Canavarı (The Kunteper Monster) and Gürcan Yurt’s Turkish take on Robinson Crusoe (Robinson Crusoe ve Cuma: Robinson Crusoe and Friday). Other comics artists whose various works have recently made a splash are Bahadır Baruter, Kenan Yarar and Ersin Karabulut.

Finally it is of interest to mention some artists that have become prominent in the course of the eighty years of local comics production. Suat Yalaz’s Karaoğlan and Turhan Selçuk’s Abdülcanbaz were able to establish themselves on various platforms and keep up with the times, thus gaining the status of classics in the Turkish comics scene. Sezgin Burak’s Tarkan is interesting because of its masterful originality and creative settings. Ratip Tahir Burak is a much admired artist for his unparalleled drawings if not for his stories . Oğuz Aral’s Utanmaz Adam (Shameless Man) has become a model for the Gırgır generation for its successful scenarios and well conceived story lines. Engin Ergönültaş has deeply influenced the generations following him with the mischievous narration and sophisticated visuals he employed to depict poverty. We can comfortably claim that most of the contemporary comic artists have come out of his “overcoat”
Frankfurt Book Fair, 15.10.2008
Gönderen Levent Cantek zaman: 10:30 ÖS Hiç yorum yok: 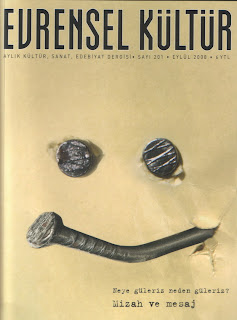 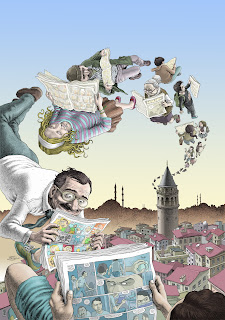 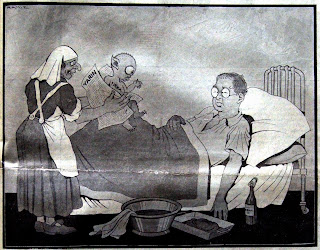 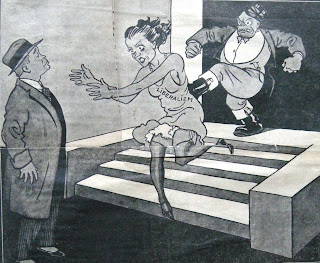 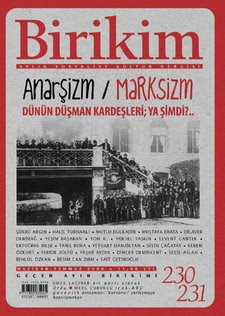 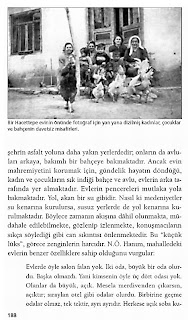 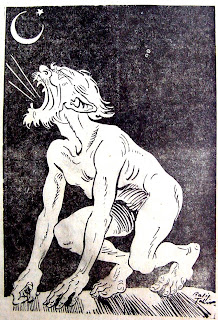 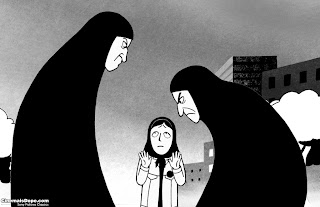 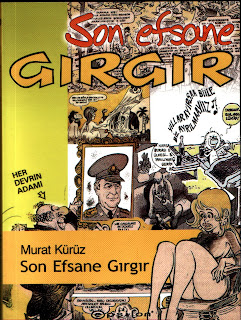